What is Nigella Sativa ?

Nigella Sativa is a flowering plant, native to southwest Asia that grows to 20-30 cm tall with linear leaves. The flowers are delicate, and usually colored in pale blue and white, with 5-10 petals. The fruit is a large and inflated capsule composed of 3-7 united follicles, each containing numerous seeds. The seed is used as a spice. There are a lot of names given to the plant over the world.

Nigella Sativa seed is also known as Kalonji (Hindi), Kezah (Hebrew), Habbat-el-barakah (literally seeds of blessing Arabic) or Siyah Daneh (Persian). In English, it is also called Fennel Flower, Black Caraway, Nutmeg Flower or Roman Coriander. Other names used, sometimes misleadingly, are Onion Seed and Black Sesame. The seeds are frequently referred to as Black Cumin; this is, however, also used for a different spice, Bunium Persicum. It is also sometimes just referred to as Nigella or Black Seed.

Nigella Sativa belongs to the Plant family of Ranunculaceae (buttercup family). Nigella seeds have little odour, but when ground or chewed they develop a vaguely oregano-like scent. The taste is aromatic and slightly bitter; It has been called “pungent” and “smoky” and even compared to black pepper, but it is difficult to agree with that comparison. There is, however, some pungency in unripe or not yet dried seeds. 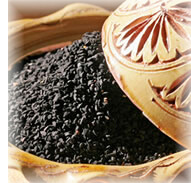 The seeds contain numerous esters of structurally unusual unsaturated fatty acids with terpene alcohols (7%); furthermore, traces of alkaloids are found which belong to two different types: isochinoline alkaloids are represented by nigellimin and nigellimin-N-oxide, and pyrazol alkaloids include nigellidin and nigellicin.

In the essential oil (avr. 0.5%, max. 1.5%), thymoquinone was identified as the main component (up to 50%) besides p-cymene (40%), a-pinene (up to 15%), dithymoquinone and thymohydroquinone. Other terpene derivatives were found only in trace amounts: Carvacrol, carvone, limonene, 4-terpineol, citronellol. Furthermore, the essential oil contains significant (10%) amounts of fatty acid ethyl esters. On storage, thymoquinone yields dithymoquinonene and higher oligocondensation products (nigellone). 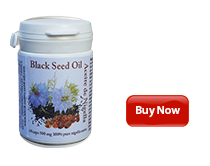 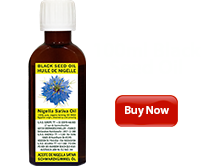 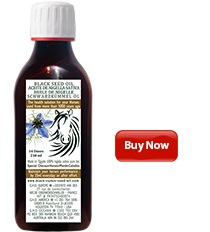 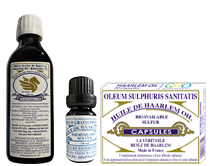